Purchasing a new laptop is not as easy as it used to be because now, we have a plethora of options to choose from. Now, it’s not just about looking for the new generation processor, more gigabytes of RAM, powerful GPU, and bigger storage, because display also matters.

Sure, processors, RAM, GPU, and sometimes storage play a vital role in the performance of a laptop. But the display is another uncompromising thing while choosing a laptop. Because apart from viewing angles and color reproduction, people also look for touch laptops as they have become the new norm. 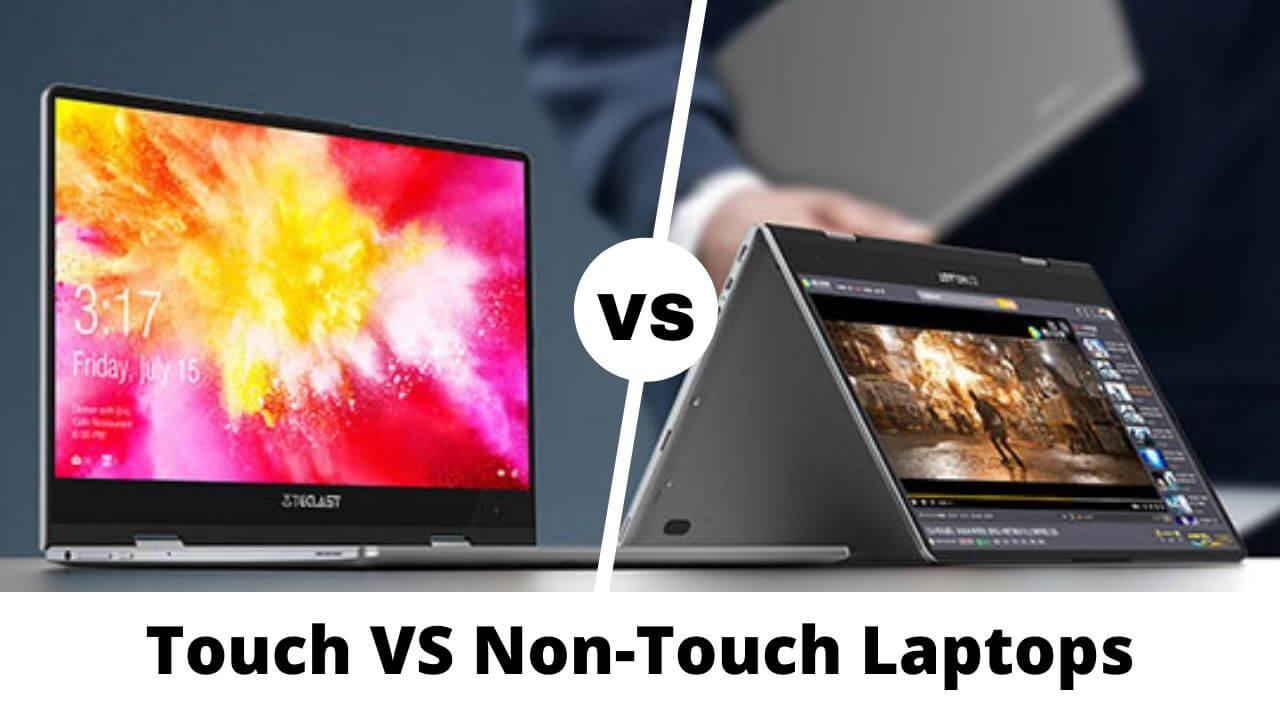 Let’s discuss a detailed comparison of touch vs non-touch laptops where we’ll discuss the pros and cons of both types of screens. We’ll also discuss how touchscreen laptops differ from conventional laptops and we’ll suggest some best choices for both touchscreen and non-touchscreen laptops.

So, without any further delay, let’s get going!

Is Touch Display and Touch Screen the Same?

Whether we talk about touchscreen smartphones or laptops, many people often get confused between their display and their screen. They often use the terms touch screen and touch display interchangeably. But there’s a difference between these two terms. So, let’s first discuss the touch display vs touch screen.

The devices featuring touchscreens are not made of a single layer. Instead, there are three main layers:

To sum up this, touch screens and touch displays are not the same. Still, people use these terms interchangeably. However, the people reading this hopefully change their concept about the touch screen and touch displays. Now, let’s see how touchscreen laptops differ from conventional ones.

How Touch Laptops Are Different from Conventional Laptops?

The touchscreen laptops and conventional (non-touchscreen) laptops operate on pretty much the same principle because they both are computers. However, the method of inputting the commands and data is different in both.

The non-touchscreen laptops use a trackpad (touchpad or mouse) and keyboard for inputting the data. So, there’s not much science in it apart from how the computer uses ASCII code for converting the pressed key to its respective code. But the case with giving the input via touchscreen is a bit different. So, let’s discuss that in detail.

Whether you are using touchscreen laptops or mobiles, their working is pretty much the same. A touchscreen detects the touch within the given display area and it’s made up of three elements: a touch sensor, a controller, and a software driver.

So, a touchscreen comes in different sizes and types, but mainly there are three types of it:

The circuits at the backend of the screen send back the interrupted point to the controller. Then the software driver will help the system in translating your input into the system’s language and the CPU will perform your operations accordingly.

The resistive touchscreens have got two layers and when you press the first layer, it touches the second layer, thus transfers your touch input to the second layer. The second layer then detects the point where you’ve registered your touch. Then the controller sends the point of touch to the CPU and your system acts accordingly.

There are two further types of infrared touchscreens:

So, let’s discuss the scenarios.

When to opt for a Touchscreen Laptop

Plus, touchscreen laptops will be more useful for a student. Because it’s easier to take notes on them, rather than carrying a bunch of books to your school or college.

When not to opt for a Touchscreen Laptop

i. Hard to View Display in Bright Light:

Since touchscreen laptops have a glossy display, therefore, it’s hard to work on them in bright lights. Their display quality is undeniable, but these are not worth using in bright environments.

Because of the presence of touch panels, touchscreen laptops have to perform more processing which means they require more energy for their working. So, they have lesser battery life than non-touchscreen laptops.

Most manufacturers offer touch sensitivity in those laptops that have a 4K panel. So, 4K panels often come at an extensive price, which can be another reason for people not choosing touchscreen laptops.

Touchscreen laptops have come a long way and both Microsoft, Google have put a great effort to bring the norm of touchscreens on laptops. However, Apple hasn’t included a touchscreen on any of its Mac systems and we don’t think that it’s planning to. Because Apple has iPads.

So, sometimes it’s hard to touch a small icon like closing a tab on Chromebook or operating in the File Explorer of Windows.

So, with these points in mind, the gap between mobile and desktop computing is clear. So far, Apple seems wiser than Google and Microsoft for not putting a touchscreen on MacBooks or Mac desktop systems. However, things in technology evolve pretty quickly, so fingers crossed.

To conclude our touch vs non-touch laptops comparison, we recommend you first identify your needs here. We have discussed the scenarios where touchscreen laptops can be useful and where they are useless, but only you can answer which one is most suitable for you.

Our Top Choices for the Best Non-Touchscreen Laptops:

1. Are Touchscreen Laptops Good for Students?

If you are a student who needs a laptop just for study purposes, not for gaming, editing, and other heavy tasks, then Chromebooks are the way to go. Because not only are they convertibles, but they also offer more portability. So, touchscreen laptops in the form of Chromebooks are good for students.

2. Which Laptop is Best Touch or Non-Touch?

The answer to this question depends on what you need on a laptop:

3. Is Touchscreen Useful on a Laptop?

It’s 2021, but touchscreens in laptops still feel like an experiment. Because not only do they cost more, but most manufacturers don’t offer touchscreens on laptops having displays less than 4K. So, the touchscreen on laptops isn’t perfect, but it can be useful in specific scenarios, which we’ve discussed above.