Because from the outside both beasts are pretty much the same and after the release of the MSI GS66 Stealth 2020 version, when MSI announced that there will be a successor to this gaming laptop releasing in the coming year (2021), many tech-savvies hoped that MSI GS66 Stealth 2021 would look a little different from its predecessor. 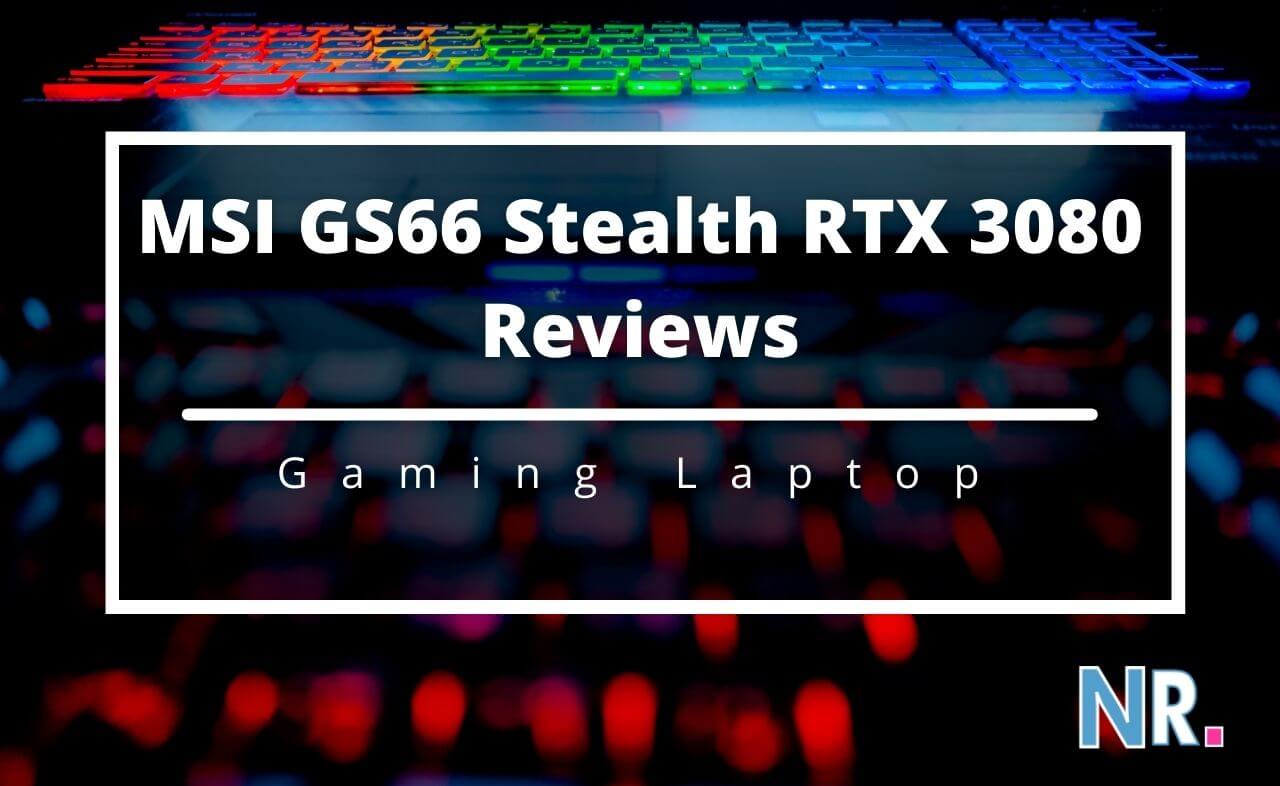 And that’s why today we’ll be talking about the 2021 version of MSI GS66 Stealth in context with GTX RTX 3080 from NVIDIA corporation because that’s the GPU MSI embedded in this gaming laptop. I’ll be giving my honest opinion about this laptop and we will mainly focus on gaming performance considering it is a gaming laptop. So, without any further ado, let’s begin the debate!

Starting with the laptop itself, the MSI GS66 Stealth is powered by the 2.2GHz Intel Core i7-10870H Processor with a base clock speed of  2.20 GHz. This 10th generation Intel Core i7 has an extremely impressive power boost clock speed frequency of 5.0 GHz which makes it superior to Intel Core i5 11th generation processors. Of course, it got the NVIDIA GeForce RTX 30 Max-Q 32 Series GPU which easily outperforms AMD Ryzen 9 4900HS. Now there are three variants of this laptop in terms of GPU. The first one is the GS66 Stealth 10UH which is released in 2021 and this is the one that we are going to discuss today because it’s powered by RTX 3080 series.

Anyway, talking about the MSI GS66 Stealth 10UH, it has got 16GBs of DDR4 Memory in Dual channel Configuration, 1TB of SSD courtesy of the NVMe Drive on Board which is fast than the traditional SATA SSD (almost 3 times faster or maybe more than that). One cool thing about this laptop that I and almost every other tech-savvy liked is its display.

It has a 1440P IPS display having a comfortable 15.6-inch screen display size. With handy product dimensions, 240Hz refresh rate, and 3ms response rate and since it is getting into the market at the start of 2021, so it is setting the trend of higher refresh rates with higher resolution on this year’s gaming laptops. To be more precise, you will see a lot of 1440P and 144Hz gaming laptops in 2021.

However, MSI GS66 Stealth is more of a high-end laptop considering its refresh rate. It is one of the best performing gaming machines so far. You can see a complete chart of specifications for MSI GS66 Stealth 10UH in the section down below 👇🏻.

For measuring the performance of MSI GS66 Stealth on NVIDIA GeForce RTX 3080, like everyone else, we have also conducted the benchmarks tests which we’ll discuss later but we are starting with the gaming aspect because this is a gaming laptop and when you want to buy a gaming laptop; you are curious about its gaming performance.

So, let’s discuss this first concerning its competitor laptops like MSI Creator 17, Acer Predator Helios 700, and of course MSI GS66 Stealth (2020 version). But before doing that, I’ll justify my claim, why I have picked only these laptops, not any other model 👇🏻.

Reasons for Comparing these against each other

Now, this may not be a literal comparison, but it will give you an idea of where MSI GS66 Stealth standing with RTX 3080 in terms of gaming.

Now I am always been a fan of playing heavy-intense graphic games like FORZA HORIZON 4, DOOM ETERNAL, GEARS 5, and SHADOW OF THE TOMB RAIDER and when I have tested these games on MSI GS66 Stealth RTX 3080 (Gaming Laptop), the great thing is even at 1440P resolution I have experienced no frame drops and the frame rate is constantly great.

Now keep in mind that I have tested these games at Ultra Graphics settings. Now let’s talk numbers which you can see in the graph as well: 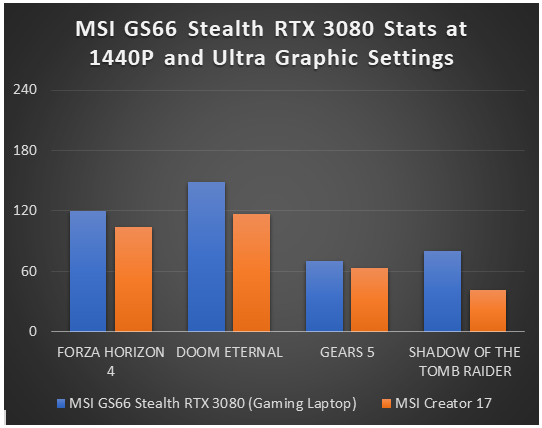 Well, this lack of performance is not because RTX 3080 is a better GPU than RTX 2080 Super, let’s leave this topic for another debate. This happened is because, on GS66 Stealth, MSI has configured the NVIDIA RTX 3080 to a simple 95-Watts of Maximum Graphics Power.

Moreover, NVIDIA is no longer making it mandatory for Original Equipment Manufacturer (OEM) to put a limit on TGP (Total Graphics Power) meaning that there won’t be any limitation on the maximum graphics power configuration. Plus, according to NVIDIA GeForce Forum, the OEM won’t reveal whether a GPU is MAX-P or MAX-Q GPU. So, that’s a disadvantage, I have observed with this laptop.

Now speaking of overall system performance other than gaming, let’s start with the processor:

Apart from embedding Wi-FI 6E and Bluetooth 5.2 in MSI GS66 Stealth RTX 3080 (Gaming Laptop), MSI used HDMI 2.0 port which can cause problems for high-end gamers as it won’t allow users to go higher than 60FPS at 4K. Because let’s face it, it’s 2021 and what people want is 4K at higher frame rates.

Even myself is disappointed with MSI for putting HDMI 2.0 in this baby because I owned a desktop PC that can do 4K at 60Hz-75Hz and let’s say if I wanted to upgrade to a laptop that can do 4K at 120Hz, MSI GS66 Stealth RTX 3080 (Gaming Laptop) won’t be in my list.

So that’s a bump. Even laptops like Razer’s new Blade 17 and 15 are featured with HDMI 2.1 so that people can take advantage of the hardware in the true sense when connected to an external monitor.

Windows Utilities And Other Tools

Now for tools like Adobe Premiere Pro and Microsoft Edge, this laptop showed almost the same performance as its predecessor. I have exported a 4K video of 5 minutes on this laptop and it took about 4-5 minutes for completing that task.

Now keep in mind that I have used only 16GB DDR4 RAM stick during this task. Opening multiple tabs in Microsoft Edge while listening to songs on Spotify didn’t slow down this laptop.

But unlike the last model, I have noticed that this laptop is a lot noisier when it comes to processing heavy tasks. Now I have heard the laptop louder than this but the decibel level of this laptop went beyond my expectations which is again a bump since the last year’s model was a lot quieter.

We have tested various high-end games as well as software packages from Autodesk, Inc on this machine. The performance was absolutely superb and worth praising. Even with basic settings of central processor and GPU, the MSI GS66 can easily outperform any conventional laptop with similar sort of specifications.

In conclusion, I just want to say that this is a great laptop but because it’s configured to give a Maximum Graphics Power (TGP) of 95-Watts you won’t be able to enjoy the true RTX 3080 experience. Although this can directly impact battery backup, for enjoying multimedia with longer battery life you can switch to basic configurations.

And let’s say if you put this graphics card in any other laptop where the Maximum Graphics Power (TGP) is up to 150 Watts, then (with the same graphics card) you will see a better performance. That’s the problem with almost every RTX 30 series GPU of NVIDIA.

However, this still won’t deny the fact that for a thin and lightweight laptop, if you compare it with MSI Creator 17 and even with MSI GS66 (2020 version), the MSI GS66 Stealth RTX 3080 (Gaming Laptop) has an upper hand. So, apart from the problem, I have discussed above, it’s a very promising laptop and GPU. On the whole it is absolutely a beast and probably one of the biggest blockbusters in the gaming laptop computer series.

No, because there are better alternatives available, but if you want a better performance than MSI Creator 17 and MSI GS66 (2020) version, this can be a choice for you.

However, the design isn’t worth its price, plus as a user who wants to use a lot of shortcuts, he might find that the function keys are placed awkwardly next to the control key. But that’s not it, it’s a bit noisier than its previous model.

NVIDIA RTX 3080 is good for gaming, but it should not be your choice if you want the best of all.