What Does A Motherboard Do in a Computer?

Have you ever removed the casing of your PC? If no then try it now, if YES, then you’ve seen complex hardware residing inside your PC. Some people might say the small components on it look like small buildings and depicts the picture of a whole town.

Well, they are not wrong. Because the complex hardware inside the PC’s case is the motherboard. 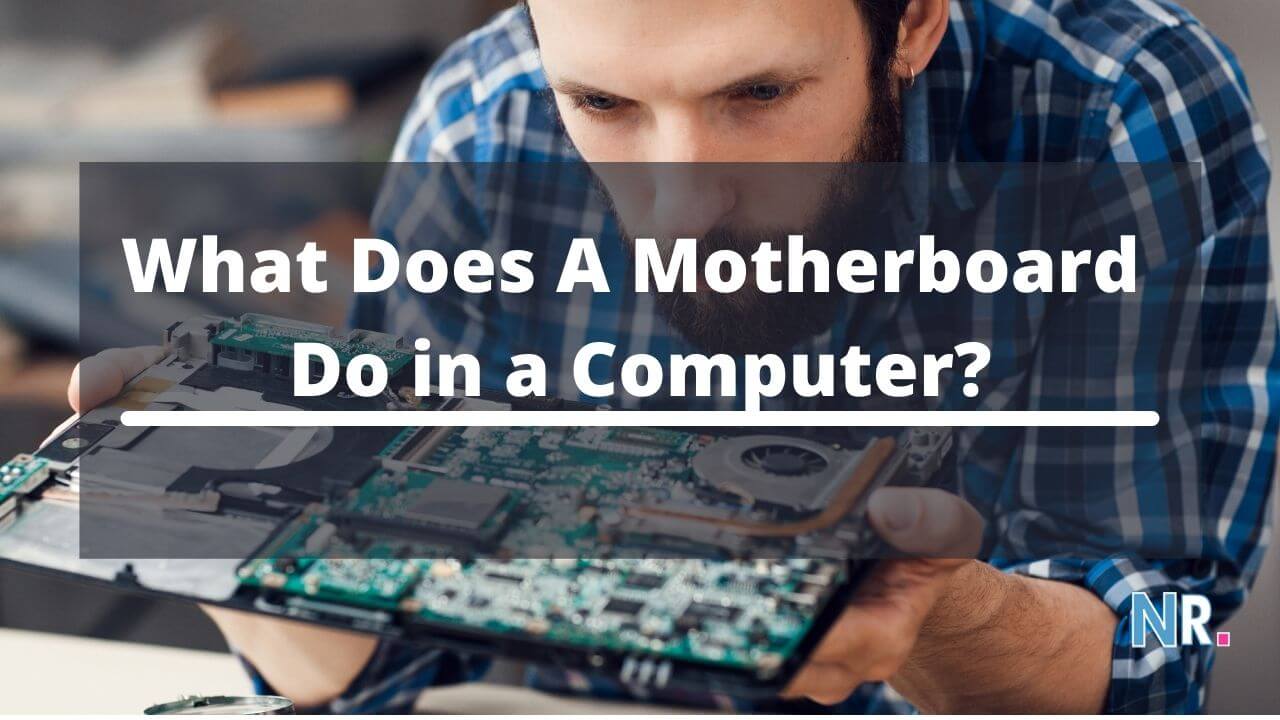 What is a Motherboard?

The motherboard is the heart of the System (or Computer) and responsible for the proper functioning of the components because every component is connected or attached to the motherboard. The other names of the motherboard are System Board, Main Circuit Board, or Mobo.

Motherboards have different shapes and sizes, and the technical term for the motherboard’s sizes and shapes is the Form Factor. The most common motherboard form factor that’s used in PCs today is ATX, which stands for Advanced Technology Extended.

ATX motherboards came into the technological world in 1995, and it’s the currently used form factor in PCs having size 12 x 9.6-inches. Now before the ATX was the AT (Advanced Technology) form factor, used in the 1980s and developed by IBM.

However, developers stopped developing AT motherboards. Another version of the ATX motherboard is the Micro ATX, and it is of size 9.6 x 9.6-inches. It is smaller than ATX and a square-shaped motherboard, unlike ATX motherboards, which are of rectangular shapes.

Micro ATX boards are cheaper and designed to fit in PCs with small cases. As they are smaller, they also consume less power and have fewer features. Other types are Mini ATX and EATX.

What Does A Motherboard Do in a Computer?

A motherboard does nothing by itself but when it’s put inside the PC and all the components and connected to the PC communicate to CPU through their suitable chips; it becomes pretty useful. The motherboard is the primary segment of a PC.

It’s a circuit board that finds a way into the PC case and it’s the place where all the PC parts interface with. Now I’ll explain the working of a motherboard regarding the components of a Motherboard:

The motherboard has a CPU Socket, and it is where the CPU or central processing unit is placed. The most important thing is, your motherboard should support your CPU. You’ll find the detail with your motherboard, that which processors it supports. So be sure to do a lot of research before buying a motherboard.

The Memory Slots is where we insert the RAM, and the technical name for this is DIMM modules. Now there are Dual Channels and Quad Channels motherboard, which work best for 2 RAMs and 6 RAMs, respectively. But that doesn’t mean it can’t support more than that. However, be sure to use the same RAM sticks because the different sticks may cause instability issues.

Expansion or Bus Slots used to add multiple components to make the computer more capable, such as a network card, video card, or soundcard. If you are a high-end gamer, then you will need two GPUs sometimes.

However, if you are not, you still need a sound card or anything that connects to the PCIe lane then make sure the motherboard you are choosing, has enough PCIe slots or not. Your processor also depends on the number of PCIe lanes that can be used on your motherboard. So, check that as well, during buying a CPU.

SATA connectors are used to connect various storage devices like SSD or HDD (hard) drives. Most motherboards will have several of these connectors so you can attach multiple storage drives. As the technological world is progressing, hard drives are also upgrading in the shape of the SSD of M.2 SSD. So, the latest motherboards also support the connection of M.2 SSDs through M.2 Slots.

On the latest motherboards, you will also find the Platform Controller Hub also known as PCH, and this hub is the latest chipset architecture by Intel that’s replaced the older architecture. Every older motherboard had 2 chips (NorthBridge and SouthBridge) known as Chipset, and these chips had different functionalities.

The northbridge, located on the upper portion of the motherboard, acted as a middleman between the CPU, PCI express bus, and memory whereas the southbridge on the lower portion of the motherboard and handled things like the standard PCI slots, SATA connectors, USB ports, and so on. So, the CPU had to go through the southbridge in case it wanted to communicate with the lower bridge.

Motherboards also come with several Input/Output Interfaces, and these interfaces are located on the rear input/output panel of the motherboard. The most common interface on a motherboard is a USB (Universal Serial Bus) port and motherboards will typically have Several USB ports because there are so many peripherals that use the USB interface such as keyboards, cameras, external drives, etc.

When one of these peripheral devices connects to your PC through a USB port, the USB port also provides the electrical power to that specific device.  In some motherboards, USB ports are on the surface of the motherboard; however, mostly you’ll find them at the back.

For video adapters, some motherboards will already have it, and that’s why it is the integrated video card. The old motherboards support only DVI or VGA Port, whereas the latest motherboards have a DisplayPort or HDMI Port to support the latest display needs of its users.

The integrated video adapters are good for normal and everyday use with light applications but they are not very powerful because when used for extensive graphic applications such as gaming, they fall short. That’s the reason people don’t use the integrated video cards and buy a custom one to fulfill their power and display needs.

Plus, you will find a sound card as well, and just like the integrated video, if a motherboard has a built-in sound card then it’s an integrated sound card.  A sound card processes audio through the computer speakers and lets the users enjoy the sound.

At the rear input/output panel, you will find a network interface card also designed for an RJ-45 connector with an Ethernet cable to connect the computer to a network.