Building a custom either for gaming or content creation is a hectic task, and for beginners, it’s almost impossible because they have to purchase quality components in their budget. User has to look for each component separately and once he/she has selected all the components in his/her budget, then the major problem arises and that’s the compatibility issue.

However, you aren’t here for a PC building guide. What brings you here is the most commonly asked question when building a custom PC that whether a Motherboard has any effect on performing your PC? If you are in a hurry then read the conclusion which you’ll find at the end of this article. 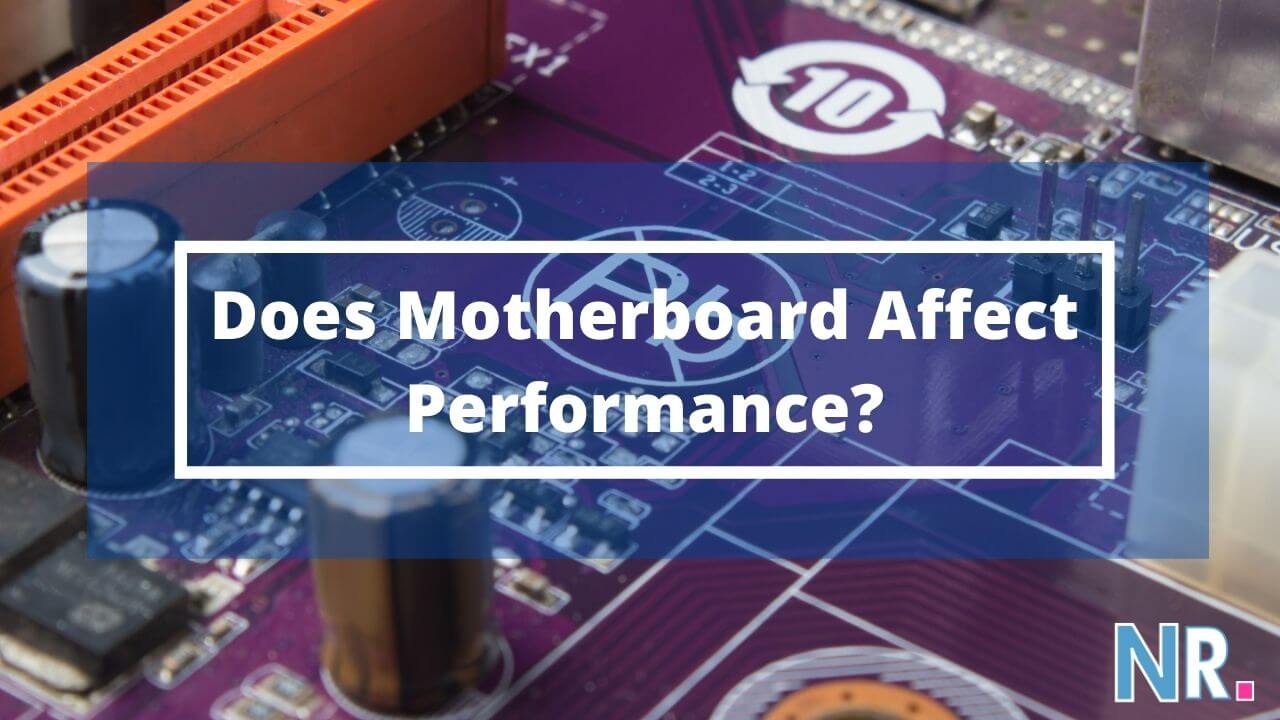 Today I’ll be clearing every confusion regarding the motherboard and its effect on the PC’s performance. I’ll take this topic from scratch so that every beginner can also understand what I am saying. We’ll cover everything related to this topic either:

Motherboard’s effect on Gaming Performance, GPU Performance, or Effects of Its Size? You’ll find a complete buying guide for your motherboard as well. I’ll also try to answer your queries related to Motherboards. So, let’s begin!

What is a Motherboard?

We all know that the CPU is the brain of the computer, and it is not wrong to say that the Motherboard is the heart of the System (or Computer). Because every component responsible for the proper functioning of the CPU is connected or attached to the motherboard.

It’s called a System Board, Main Circuit Board, or Motherboard because most of your computer’s components are directly connected to it. But does the Motherboard do? You’ve various sizes and types of motherboards but the four most commonly used form factors are Micro ATX, Mini ITX, ATX, or EATX and every manufacturer builds the motherboard to conform to the motherboard standard.

Does Motherboard Affect the Performance?

Now let’s see what are the effects of a Motherboard on the gaming performance, GPU performance, and overall system’s performance. I’ll take this topic in different scenarios to answer your myths related to Motherboard’s effects with proper reasons.

Starting with a scenario that commonly occurs in every PC enthusiast’s life is building high-end gaming or rendering a PC in the specified budget. Many people spend most of their money on components like RAM, Hard Disk, Processor because these are the most highlighted ones for the performance of a PC.

But what most people don’t know is that Motherboard also plays an important role. Or in some scenarios during your search for the best components on the internet you’ll find a lot of myths on Reddit or Quora that if you want a high-end PC, your motherboard should also be a high-end one otherwise you won’t get the full advantage of your Processor’s power. But that’s just a myth.

Because even with the latest processors like the 8th generation Corei7 or Corei5, budget or cheaper Intel motherboards like H310, B360, or Z370 won’t have any noticeable effect on the performance of your processor.

But you will have a minor effect on performance which you will notice only through benchmarks, you can’t observe that much performance difference.

Now the question arises: why does this minor difference occur? You’ll find the answer to this question 👇🏻. One more noticeable thing is if you are performing a heavy task with a cheap motherboard you will have limitations on the performance because the cooling of the I/O of the motherboard won’t be as good as you’ll find in a flagship motherboard.

But if you think that budget motherboards will have any effect on an ideal PC’s performance, then you are wrong.

2. Does the Motherboard Chipset affect the Performance?

You all have seen different Arduino; Microprocessors and they work through a small chip embedded in them and guide them on what to do in a particular situation.

So the case for motherboards is not so different because every motherboard has a chipset and there’s a unique microcode of every chipset as well and that means the flow of data is unique for every motherboard. And that’s the reason why you face a minor performance difference.

Not only that, every I/O has its dedicated heatsink and the chances of heating issues in flagship motherboards are slim to none. Whereas the budget motherboards suffer from heating issues mostly when it comes to handling heavy tasks and that’s a major downfall of them.

The more heat I/O generates, the more heat throttling processor has. So if you are a high-end gamer or using your motherboard for heavy tasks like high-end production and content creation then heavy end motherboards are not intended for you.

4. Can Motherboard Affect the Gaming or its Performance?

Now it won’t be fair if we are talking about gamers or building a pc for gaming, that we won’t discuss the effect each component has on the gaming performance. But that will be the case some other day; however, here we’ll be looking at the motherboard effects on gaming or whether it matters for gaming or not. Let’s dive in 👇🏻.

The short answer to this question is no because the motherboard provides the connections for your components or other gaming accessories like video cards or processors and without all of that, you won’t have any gaming at all.

However, if you are wondering if you’ll be able to increase the loading pace of your games or does motherboard affects FPS, then NO that’s not the case. But if you want to increase your PC’s performance then you should look into the BIOS of your motherboard and find a guide related to overclocking your hardware concerning your motherboard’s model on the internet.

There’s plenty of stuff related to overclocking the hardware but that’s a risky task. So, watch a lot of guides before actually doing it. Because overclocking may lead to the system’s instability.

The short answer is, Motherboard only provides the connections or slots for the components connected with your system. However, if you are using a single GPU then your motherboard does not affect the GPU’s performance. Because the performance of GPU depends upon the model of GPU, its VRAM, its compatibility with your monitor. There are many cases where the users buy a high-end graphics card but it is not compatible enough with their current panel so eventually, they are wasting their money spent on buying a high-end graphics card. If you want to see which gaming monitor you should look for then click here to read it.

What makes a motherboard good? Or what you should look for before buying a motherboard. You’ll find a complete guide here 👇🏻.

1. Select Components Other than Motherboard

Also, you don’t need to spend money to get higher frames in your games by buying an expensive motherboard because you won’t get any. You can read the detail above 👆🏻.

The most important thing is, your motherboard should support your CPU. You’ll find the detail with your motherboard, which processors it supports. So be sure to do a lot of research.

If you are a high-end gamer, then you will need two GPUs sometimes. However, if you are not you still need a sound card or anything that connects to the PCIe lane then make sure the motherboard you are choosing has enough PCIe slots or not. Your processor also depends on the number of PCIe lanes that can be used on your motherboard. So check that as well, during buying a CPU.

You should also find out whether your RAM has enough DIMM slots, the maximum supported RAM, and which DDR your motherboard supports.

Now there are Dual Channels and Quad Channels motherboard, which work best for 2 RAMs and 6 RAMs, respectively. But that doesn’t mean it can’t support more than that. However, be sure to use the same RAM sticks because the different sticks may cause instability issues.

Make sure your motherboard supports HDDs, SSDs, DVDs, MDOT two, etc because you might need them as the games and software are getting heavier and heavier day by day.

There are four form factors for motherboards that’s the technical name of motherboards’ sizes. So, you’ve got EATX, ATX, Micro-ATX, and Mini-ITX. You’ll find the form factor compatibility with your case also in your motherboard’s description.

Now, this may not be necessary but for the beauty of the system, choose a motherboard color that matches the colors of other parts of the system.

Do Expensive Motherboards Worth buying?

It just provides the connectivity.

How to tell if Motherboard is bad?

Your motherboard will display an error code, or generate one or more beeps, or the system keeps rebooting, or one of the ports or expansion slots fails when your motherboard is bad.

The motherboard just provides the connectivity to the components attached to your system so they can work perfectly. However, it doesn’t have any noticeable effect on the gaming or overall performance of your system.

But you’ll get a minor difference, which you only notice with benchmarks, not by observing your system. Also, the larger the motherboard, the better the performance and the more expensive it will be. Similarly, smaller motherboards are budget or cheaper for the price; however, they still give you reasonable performance.